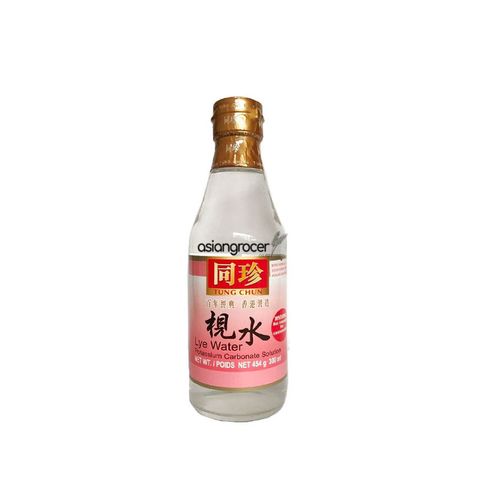 Lye water is a strong (caustic) liquid that is safe to use in very small amounts in cooking, but it can be dangerous if lye water is swallowed undiluted straight from the bottle.

Lye water is an ingredient used in Asian and African cooking for cooking meat, rice or noodles and vegetables like corn, beans, maize or okra to soften or add flavour or retain vegetable colour. It is usually added as part of the recipe in small amounts (spoonfuls).

The main purpose is to create food which can be preserved for an extended period of time like Asian noodles or century eggs. Soaking the noodles in lye water allows it to have a yellowish colour. On the other hand, it also causes the egg whites to form a gel-like texture to create century eggs.

Aside from Asian recipes, lye water is also essential for the processing of various types of food. For example, it makes peeling of fruits and vegetables much faster. It is also added to the manufacturing of some chocolate and cocoa plus other sweets which need a caramel colouring. Even manufacturers of some sodas and ice cream use this as a thickening agent.

For other commercial manufacturers, lye water is also used for achieving the perfect crisp and crunch. The German pretzels have an amazing texture because of this ingredient. The same goes for hominy or dried maize.

Lye water can also be used in soap making and as a cleaning agent.